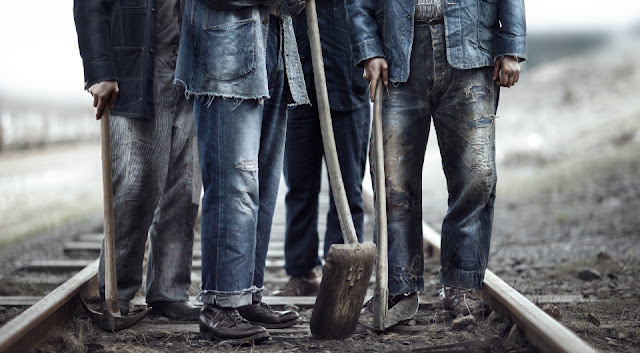 A few years ago I wrote an article for Acclaim Magazine about the endless recycling of blue jean styles in the fashion industry. I decided to update it for my own blog, due to the extra knowledge I have gained over the years since this article was published. 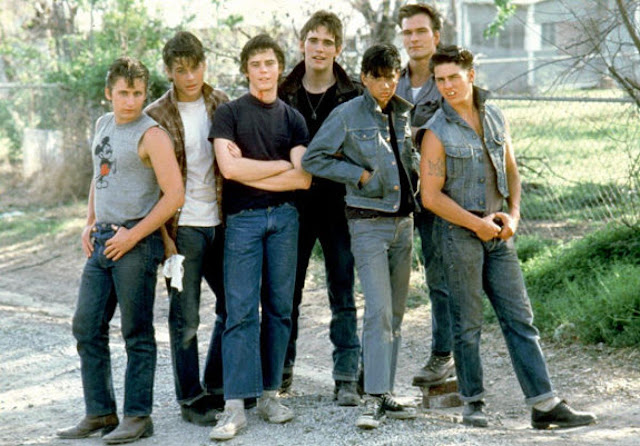 It’s always good to know where and why something was made, seeing as everything in the olden days was made for a clear functional purpose. Jeans have become a style staple in all our lives but why were they created and how far have we really come from its origins?

Levi Strauss, a pedlar who had immigrated to North America from Bavaria, followed the Gold Rush in California in the 1850s to sell his goods. Strauss put together work pants that were supposedly made out of brown canvas intended for tents.

Tailor Jacob W. Davis, who was making workwear had a customer enter his store with a problem, his "overalls" kept ripping the pockets. Jacob thought about how to make them stronger and with the skills from horse-blanket making used rivets in the corners. An everlasting style was born, the crowds of buyers started flooding in and Jacob couldn't keep up with the workload, he needed help.

Jacob reached out to Levi and asked for cooperation making these new riveted overalls. Together they got a patent for the design and built an empire over 17 years before the end of the patent, meaning other brands could use rivets too. Then, in the 1860s, they began to fabricate pants made from 9oz denim, and because the pants were dyed indigo they were named “blue jeans”.

After the end of the gold and silver rush, the humble pair of jeans stopped being a practical item. Jeans slowed in sales and almost became a thing of the past until the 1930s were it evolved into a fashion statement. As subsequent styles have changed with purely aesthetic fashion trends and every now and then we seem to take a hot lap back to the beginning and start again. We’ve seen jeans go from being big and baggy to stove-pipe skinny, and back again for at least two more cycles—and, let’s admit it, we’ve all bowed to the puppet masters every single time, emptying our blue denim pockets along the way. 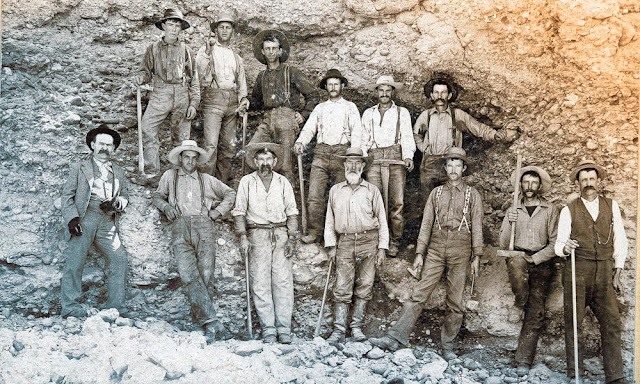 This is where it all began. Jeans were considered popular workwear by people who needed durable clothing that could withstand wear and tear, eg. miners, railroad workers and cowboys. The style was more roomy and straight cut, to be more comfortable for the workers. 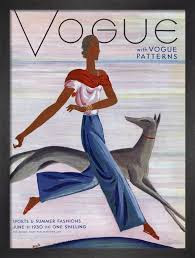 It was in the 1930s that Vogue turned workwear into “fashion”, featuring its first model in denim on the cover, hinting that jeans could perhaps be a fashion statement, and not just reserved for the true blue, hard yakka working man. 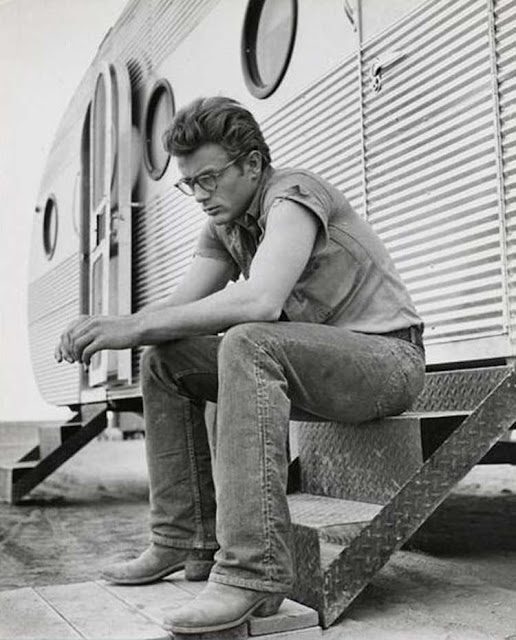 In the ’50s, it seemed like everyone wanted to be a T-Bird or a rebel (most likely a rebel). With schools banning jeans due to their notoriety as the “bad boy” uniform, movies with Marlon Brando and James Dean further backed this stereotype on the big screen. Not only were the jeans more a slim cut than baggy as represented by the classic 501 cuts, but they also started to become cropped and cuffed, allowing for more of the physique (and shoe choices) to be showcased. 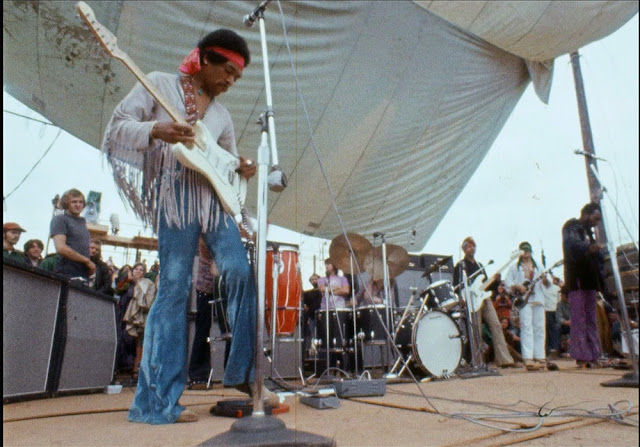 The disco era took some Saturday night heat out of the rebels’ movement and put it on the d-floor with flared bell-bottom jeans. The hippie dancing age not only brought literal flare to their denim but also sartorial flare, as personalising your jeans became al the rage. Custom embroidery, bright colours, stonewash, rhinestones, and patches were just some of the jean trends of the time. 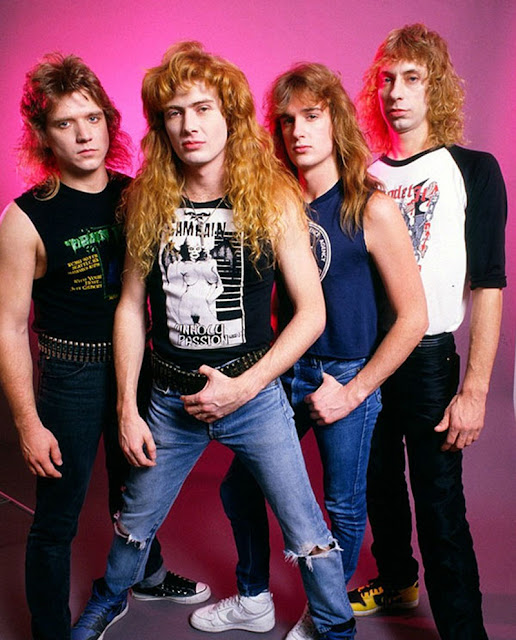 Hair was even bigger but the denim was downsized. Outlandish trends really took over the denim industry in the ’80s and for all the guys that couldn’t put themselves through spandex sessions, there were super skinny stovepipe jeans instead. It was a little hard to see the practicality in these but with a diet of booze and Mr Brownstone being too fat for your jeans was probably not a concern for many of the time. Stonewash, acid wash, and ripped jeans were some of the most popular looks, along with skinny leg cuts. 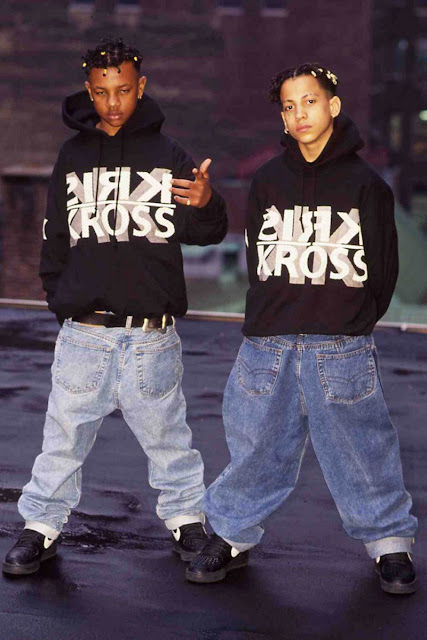 I know you want me to give you some kind of sign, girl, but Peter can be sent packing on this one. Instead, jeans went back to the 1800s, and full circle for the first time, with even bigger and baggier cuts. Rappers and the wider hip hop scene took the jean trophy and influenced the game so much that kids were wearing their baggies backwards. Another favoured look of the decade was the good old double denim AKA ‘Canadian Tuxedo’. 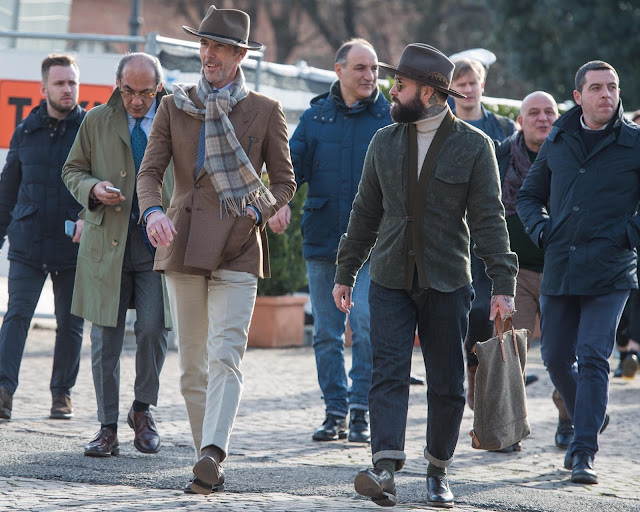 Here I am at Pitti Uomo

The acclaimed high-fashion designer Yves Saint Laurent once said, “I have often said that I wish I had invented blue jeans: the most spectacular, the most practical, the most relaxed and nonchalant. They have expression, modesty, sex appeal, simplicity – all I hope for in my clothes.” Denim has become so iconic, it’s rare to find someone who has never worn a pair of jeans, in any one of the many iterations they have gone through.

Present-day trends have obviously been cooked up from many of the previous eras mentioned here, with a little ’50s style mixed with a dash of the ’90s and a sprinkling of 1800s on top, just for good measure. We are seeing less skinny-leg jeans and more relaxed or tapered cuts, and most recently it looks like flares and bell-bottoms are making a comeback (although this seems to be reserved for the ladies… so far).

As to where the blue jean will be taken in the future is anyone’s guess. The rise of made-to-measure jeans and the introduction of more quality Japanese, Indonesian and Thai denim makers is probably where I’d put my money. If only I was a gambling man!