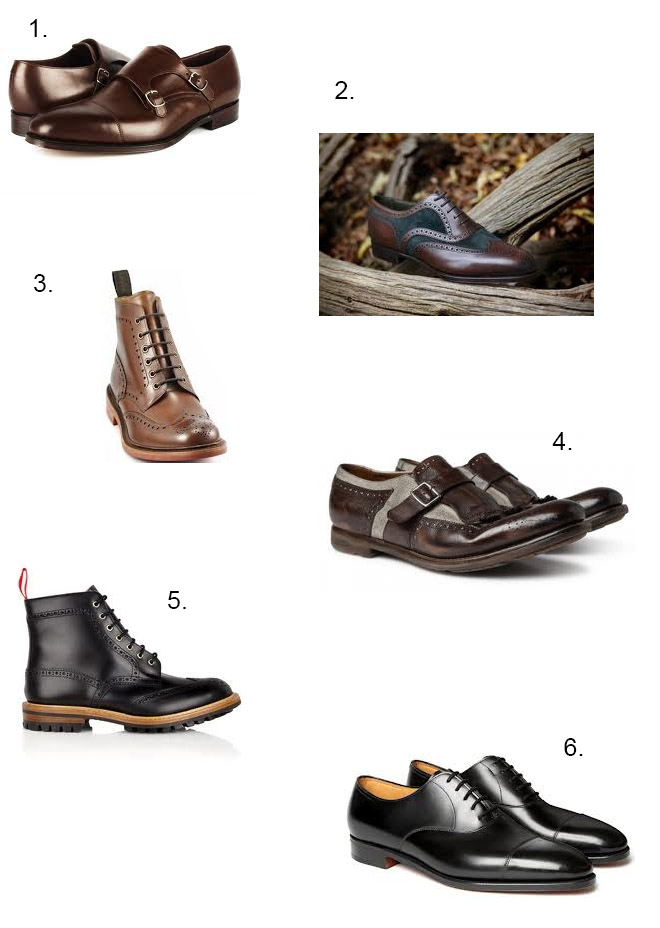 1. Loake Cannon Double Monk :
These shoes aren't an Oxford, Derby, Loafer. They're neither defined as Formal nor Smart Casual. These are the ultimate inbetweener shoe. Despite people being often scared to try it on or unsure about the buckles, the monk strap can look very formal with a suit, strapping and smart with chinos or split suit trousers and laid-back casual with jeans or shorts. I love the look and simplicity of the shoe. Carelessly slide your foot in, don't even buckle it up and off you go. These are high priority on my list as the inbetweener I've been missing. Brown for now and maybe Black for later.

2. Edward Green Brogues:
In 1890 Edward Green began to make hand-crafted shoes for gentlemen in a small factory in Northampton. He soon gained the reputation for making the finest shoes in England for the discerning few. This reputation was founded on the skill of his craftsmen and his belief in excellence. These shoes have a voice of their own. What I love about this particular shoe are its Earthy tones with the Muddy Browns and the Grassy Greens. Remember just like clothing, shoes should reflect your personality.

3. Loake Wharfdale Boots:
Loake are another high quality British shoe that have been around since 1880. It's not the highest of the English hand mades, but the quality and heavy duty craftsmanship is still all there. I sell these boots at Beggar Man Thief and the first thing we do when a new range or product comes in, is we get them on our feet. As winter's just around the corner, I'm super keen on a brogue boot that isn't heavily weighted, so the Wharfdale is perfect for me. It actually fits like a normal derby shoe. I'm hoping to score myself a pair of these ASAP.

4. Church's Shanghai:
These unique shoes are a reissue of a 1929 footwear design, originally developed for Englishmen living abroad in colonial countries. The Shanghai proves Church's have always been innovative in footwear design. Today the unique flexi sole (which was originally built to deal with hot weather and sudden downpours) has been remodelled and incorporated into a number of Church's styles. Years of handcrafting have made Church’s an iconic brand and I've wanted these Shanghai's ever since I first read the above story. To own a piece of history is a talking point in itself. Price doesn't matter, wait doesn't matter, I'll own a pair or get buried in them.

5. Trickers x END Colab Boots:
Trick and a Treat, It's one of those moments in life when you see something and you just want it! I remember a few years back I needed to get to Germany; I needed a plane ticket so bad but I couldn't afford it. I scanned the net and paper for quick cash ideas that didn't involve nudity, loss of dignity or jail time. I came across a Government incentive for completing accredited short courses. Now this is how desperate someone can be, I spent 2 months doing semi useless short courses but in the end, I was on that plane.
To me these boots are the footwear equivalent of Germany. It ticks all the boxes for what I'm after; Black, Boot, Brogue, Contrast Sole (Versatility) and they just look damn good.

6. John Lobb Black Oxford:
To witness the step-by-step process by which a pair of John Lobb shoes comes to life at their Northampton workshop is to see traditional craftsmanship and genuine skill in action. From the first step – the initial selection and quality checking of the calf skin – through to completion of the final product some 190 individual stages later, the quality of the raw materials and the fine attention to detail is always evident. It’s a journey that takes some weeks and many man-hours of painstaking labour, but the result is a pair of the finest men’s shoes – beautifully crafted, quintessentially English, unmistakably John Lobb.
To have a pair of John Lobb in my wardrobe would be like having that Daytona Rolex or a Bespoke Brioni Suit. No matter how long they sit there, when the Lobb's come out, it's always a special occasion. When I have these shoes, the future will be bright.